More information about some key features:

The play list will show a graphical view of the flow of the songs and other sound files. Also, you have time information about the next cue point or control event in the play list. Broadcast comes with two independent play lists, where the second play list is mostly used by the presenter for planning a coming sequence. The second play list can also be used for creating a completely different hour, for example for voice tracking to a night hour.

Advanced monitor is a multi track editor and as in any other editing in the Radiohost system the editing is non destructive. This means editing is made as a template on top of the sound file and you can always set the file back to its default settings with no lost of sound quality - even after 1.000 editings. 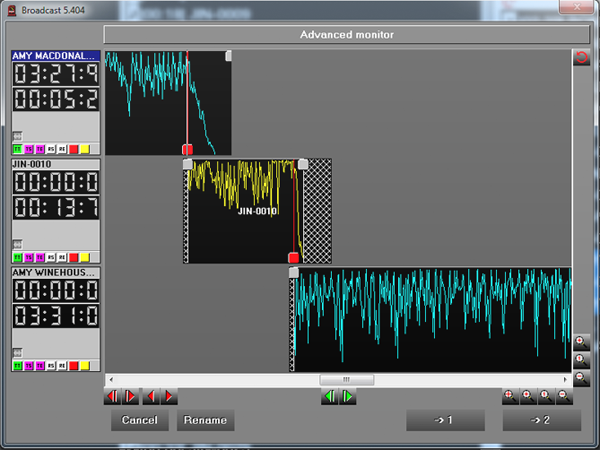 In the play list you can bundle some files together in a group. This means Broadcast will handle those files as one file. The group can be collapsed to show only one line in the play list.
Timers are used for synchronizing the play list to a time schedule by starting a file at a specific time. Used in conjunction with groups you can have timers acting several files before the timing must appear.

The play list can be controlled by a remote signal. In its simplest form the trigger signal will play the next song, stop the play list, etc.
A more advanced control will be to have Broadcast listen for a remote signal between 17.54 and 17.56 to start a specific file in the play list.
If Broadcast is used as a master station it can send triggers for example at the start of the first commercial it can send a trigger to start the commercial blocks at the satellite Broadcasts. There will be a nice fade out/in when the commercials starts.
Loop-record is a feature used to mix an external radio signal into the play list. If the station is making all music, commercials, etc. but not the news. The news can be taken from the air and mixed into to play list. There will be no hard relay transition as the overlap has a fade out/in.

Every presenter can save playlists he /she created in a separate file for later use or to share it with colleagues.

The presenter can read notes, attached on a song in the database. For example: list of concerts, highest position in the charts, albuminfo, etc. This information must be added via Communicator.

PC: Any standard officecomputer will be sufficient.
Operating system: Windows 10, Windows 8.1, Windows 7, Windows XP, Windows 2003 Server.
Sound card: Any standard sound card. At least two stereo are recommended with up to 4 stereo out puts as maximum. Please, read our FAQ before you buy a soundcard.
Hard disc: Many stations which have no separate file server choose to use the PC where Broadcast is running as a file server.
Ram: min. 512 Mb

The radiohost system have remarkably helped us to improve the quality of our evening, nights and weekend hours. The voice track function enables us to have our top hosts on air 24 hours a day. In the day hours our hosts can easily schedule the playlist 10 or 15 minutes...

We checked out a lot of systems before we purchased Radiohost. We could not find a system that can handle all the things we can do with Radiohost. The system can handle whatever we can dream of, using it live or automated. It's easy to use, and for such a...

In the begin of 1999 we started to search the market for distributors of radio automation systems. After reading a lot of system descriptions and testing just as many demo installations, we finally chose the Radiohost system. We are completely satisfied with the system as it is easy to start...

Six months ago we where looking for a system to replace our Wavestation and we tested a lot of the popular systems available on the market. Most of the systems where not very user friendly and they did not perform as well as we had expected. By chance we discovered...

Broadcast is highly user friendly. People who normally run away screaming when they see a computer, is USING this system after a few minutes of instruction. Communicator makes it easy to manage files and directories and you will learn how to use functions like talktime, overlap, normalize, speak, etc. in...

It's a definite must for any station. It's easy to use, far cheaper than the other makes in the world and the best part, it does exactly the same... simply great. The first time I was shown Radiohost I knew I needed it, and I have not been disappointed. The...

I have seen a lot of booking programs in my 13 years in the business and I must say that Easy Spot is the best I have ever seen. Easy Spot is easy to use for first time users and it will meet the needs required in even the most...